When infrastructure such as a new rail line is built, the value of the land around it goes up: suddenly this land is desirable for housebuilding because people want to live near the new rail route. Landowners hit the jackpot. The problem is that such infrastructure projects are often tricky to get funding for in the first place. It ought to be possible to take some of that potential uplift in land value, and invest it in the good infrastructure to get projects such as new rail lines off the ground.

This idea is called Land Value Capture (LVC). LVC has the potential to solve one of the big issues we face – that it’s easier and cheaper to build roads for new housing rather than public transport. LVC helps solve this problem, and also gives landowners and developers incentives to build higher density developments with less space for cars.

LVC is being put into practice by Dr George Hazel of E-Rail, who has written this guest blog for us.

“For the last ten years, E-Rail has been working on a way to plug the funding gap for new investment (primarily in rail) by developing a means of capitalising on the uplift in land value around infrastructure projects and using it as a funding source.

This is known as Land Value Capture (LVC) and it is a way for communities to recover and reinvest land value increases that result from public investment and government actions. The concept of LVC is not new. It was used for the Canadian Pacific Railway completed in 1881, providing 12,500 miles of new track, and the London Metropolitan Line, 41 miles of underground and 34 stations, which opened in 1863. More recently, the Ørestad metro, that opened in Denmark in 2002, was also funded using LVC.

The historical schemes were done in an age of different planning and procurement rules and regulations, and the Ørestad project used land wholly owned by the Danish State and the City of Copenhagen. It is not so easy to do it here and now, given the necessary constraints of independence and discretion required by current procurement and planning rules and regulations, especially when seeking to secure contributions from multiple private sector landowners and developers interested in maximising their return.

E-Rail spent many years researching and developing a method of capturing and sharing this uplift created by a new transport facility between the provider of the service and the landowners and developers who benefit. The process was not easy, but we have now developed, tested and delivered a method that is unique in the UK. We’ve been doing this as we care about improving our infrastructure and developing sustainable communities.

In the north east we have proved it can be done, working with Northumberland County Council (NCC) to secure between 25% and 30% of the capital funding required for a new passenger rail line from Land Value Capture (LVC). This project will have a massive benefit to communities, improving connectivity without increasing the number of cars on the road.

The line – which Beeching closed for passengers in the 1960s – was allocated £34m to commence early works by the Department for Transport (DfT) on 23 January 2021 and will see 18 miles of track upgraded and six new stations. This will be the first time our methodology has been used globally. [See a map of the Northumberland Line].

Our method can be applied to any fixed infrastructure transport scheme – heavy and light rail, metro, BRT, roads, bridges, ferries and potentially flood prevention schemes. It can apply to single stations or to large multi-station schemes where land value uplift will occur.

As we emerge from the COVID-19 pandemic, and the economy recovers, support from LVC could play an important role in funding future transport infrastructure.

We know that there are more opportunities for this to work elsewhere. In fact, there are a significant number of rail projects, both heavy and light, around the UK that local transport authorities want to deliver for social and economic reasons. Funding for many of these projects has historically been constrained, and this will be further exacerbated by the unplanned government spending on the COVID-19 pandemic. We have already seen a reduction in central government infrastructure funding for Network Rail and Transport for the North and the current economic outlook suggests that this is just the start. We believe LVC could be a critical building block to economic recovery.”

Dr George Hazel is a Director of E-Rail, E-Rail International and the George Hazel Consultancy. E-Rail was set up in 2010 to help secure and deliver private sector money raised from land value capture to help contribute significant capital cost towards the building of new public transport infrastructure. The company has worked around the world introducing its methodology which is being explored throughout the UK, Sweden, Australia, New Zealand, and Canada.

Transport for New Homes @TfNHomes
2 weeks ago
Jenny Raggett tells us about @TfNHomes’ report on Garden Towns & Villages. “If we want garden communities to work, we need to invest in modern public transport” https://t.co/WWmacq7C6q
View on Twitter
8
10

Transport for New Homes @TfNHomes
2 weeks ago
‘Cowpat developments’ are small developments with no amenities, plopped on green fields far from anywhere. @respros is giving us a glimpse of some of the places @TfNHomes has been visiting… look out for our report later this year. https://t.co/kZ4NVCwqgj
View on Twitter
14
23

Transport for New Homes @TfNHomes
2 weeks ago
We’re delighted to be holding our first in-person event for more than 18 months. On an eventful day for politics, we’ll be talking about what the future might hold for planning and transport. https://t.co/vW5QvoK3sC
View on Twitter
0
5 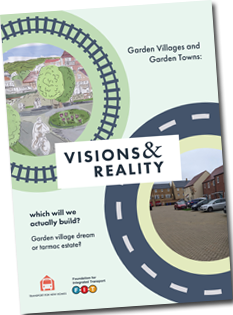 Our 2020 report finds that far from being vibrant, green communities, Garden Villages and Garden Towns are at high risk of becoming car-dependent commuter estates.